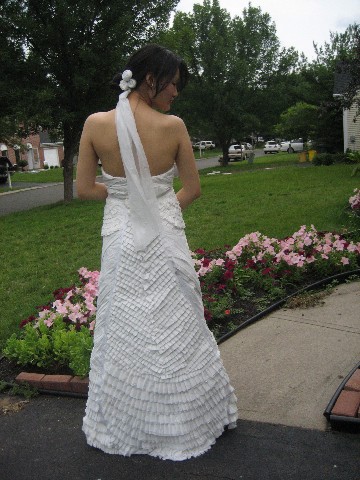 Well, I thought the duct tape prom dresses were cool, but today I found out there is also a contest sponsored by Cheap-Chic-Weddings.com that challenges contestants to create a "a wedding gown and headpiece that you have constructed out of toilet paper, tape and/or glue ONLY."

Check out these winners from 2007, 2006, and 2005. Impressive.
Posted by C. Mytko at 7:12 PM No comments:
Email ThisBlogThis!Share to TwitterShare to FacebookShare to Pinterest
Categories: misc

how does a word get into the dictionary?

Each year, the Merriam-Webster dictionary has to decide which new words should be added to the dictionary. 2007's additions include crunk, DVR, ginormous, sudoku, speed dating and telenovelas. (2006's new words includes drama queen, unibrow and supersize)

Of course, I always ask, "how does a word make it to the dictionary?"

Many of these words have been around for a while. (In fact, Merriam-Webster traces ginormous back to 1948, when it appeared in a British dictionary of military slang!) However, just because a word is used, doesn't mean it will make it into the dictionary. Editors who work for the dictionary spend a few hours each day reading magazines, newspapers, and electronic publications, checking for new words or variant spellings of existing words.

If they find a word of interest, they will write a citation for it. Later, definers go through the citations and decide which words should be included. It doesn't matter how often a word is cited, because it may only be found in very specific writings (like only scientific journals or only rap lyrics). To be included in a Merriam-Webster dictionary, a word must have a number of citations that come from a many different types of writing over a long period of time. The word must be used long enough and in enough variety such that the word's meaning is clear.

The number and type of citations needed to add a word to the dictionary varies. In some cases, a word comes on fast and widespread, and its meaning is clear and uncontroverted. This was the case in the 1980s with the word AIDS. In such a situation, the editors may decide to include the word, even though it has not been in use for a long period of time.

Still interested? There's even a "new word watch" blog! (Scroll down to view most recent posts.)
Posted by C. Mytko at 10:22 AM No comments:
Email ThisBlogThis!Share to TwitterShare to FacebookShare to Pinterest
Categories: words 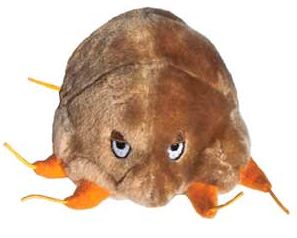 I have been hearing from a number of folks back home that there is an outbreak of itching in the Chicagoland area. Of course, I am always in the mood for a good arthropod story, so I looked into it. (Ends up the bites are caused by arachnids, though, and not insects!)

"We don't have positive identification on the type of mite that it is. We do know that it is a mite," said Kitty Loewy, spokeswoman for the Cook County Department of Public Health. (Tribune)

Monday night, authorities left glue traps in forest preserves and other wooded areas. On Tuesday, they still didn't catch any; they think because the mites are "too small." But anyone bit by these insects are showing the telltale rash that develops 10 - 12 hours after being bitten. (The rash is a reaction to toxins in the mite's saliva as they gnaw on you as they look for larvae that aren't there. The toxin is potent (for insects at least). One mite’s bite can kill an insect larva 170,000 times its own weight.)

In the suburbs, Dr. George Tsoutsias said "Patients were actually comparing their lesions out in the waiting room," said. He saw 32 cases this weekend in the Adventist La Grange Memorial Emergency Department.

Investigators think this outbreak may be caused by an itch mite from Europe—the oak leaf gall mite, Pyemotes herfsi, a relative of the straw itch mite (which farmers have dealt with for years). It feeds on midge larvae in oak trees, falling when it runs out of food, often right onto people passing below. Scientists say these European arthropods may have hitched a ride here due to increased worldwide shipping and transportation that moves new species around the world. Kansas knows all about this, since they dealt with an outbreak in 2004. (The Pittsburg State University has a site with plenty of pictures and Quicktime videos of both the bites and the bugs.)

Information provided by entomologists indicated that these mites were associated with a gall-forming insect (a small fly called a "midge") that causes swellings along veins of oak leaves.

The female midges lay eggs on the leaf surface, and the young midges crawl to the edge of the leaf or along a vein where they secrete chemicals that cause the leaf tissue to curl up into a cylinder-like gall protecting the midge larvae inside.

The itch mites prey on these midges, invading the galls, where they feed on the midge larvae and begin to reproduce. Each female mite can produce up to 250 adult offspring, most of which are females. Each generation requires only seven days, which helps explain the large population numbers that have been encountered where the problem has been serious. (like Chicago right now)

The mite’s life cycle is unusual. A mated female searches for a host on which to feed. She is small enough to be carried by the wind. If she finds a rolled leaf (gall) on an oak tree, she enters the gall. If she finds midge larva, she inserts her mouthparts into the larva. Within minutes, a potent neurotoxin in her saliva paralyzes the midge larva, who will die of starvation.

Once the female starts to feed, she can develop as many as 250 offspring. In seven days, her “abdomen” is fully distended, and her young -- of which only 5 to 10% are males -- are ready to emerge as fully developed adults. Males emerge ahead of the females, and mate with the females as they emerge from the mother and die shortly after. The females complete the cycle by dispersing in search of new hosts.

Luckily, the bites are not medically dangerous, just annoying (see video), unless people scratch enough to damage their skin, allowing bacteria to get in and cause a secondary infection. Unfortunately, bites can continue to itch for 10 - 14 days. To prevent the bites, scientists suggest wearing long clothing and insect repellent with DEET while outside, and washing clothes immediately after coming indoors. To treat them, doctors recommend using hydrocortisone cream and antihistamine.

At first, some people were hypothesizing that the outbreak had something to do with the cicada emergence earlier this summer (maybe the cicada larvae are a food source since they hatch 6-10 weeks after being deposited in the branches, and fall to the ground? Gross.). But, according to NBC, seven other states are dealing with similar outbreaks. They are Texas, Nebraska, Kansas, Missouri, Ohio and Kentucky, so this is probably not the case. (The cicadas were mostly in northern Illinois and southern Wisconsin.)

That family includes the periodic cicadas, the noisy bugs that flooded the Chicago area to mate earlier in the summer. The next generation of nymphs are emerging now, presenting an irresistible food source to any Pyemotes mite looking for something to eat.

"They're hatching out right now in the forest preserves by the countless zillions," Summers said. "It would be an endless feast for them. That would be my best guess right now."

Posted by C. Mytko at 9:06 AM No comments:
Email ThisBlogThis!Share to TwitterShare to FacebookShare to Pinterest
Categories: news, science 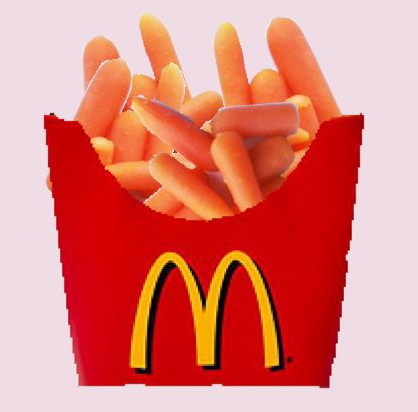 Now, you may have already heard this one on the news, but it's pretty incredible. The August issue of the Archives of Pediatrics & Adolescent Medicine published an article demonstrating the power of advertising to small children. (You can read more about this study in Forbes or the Associated Press)

By the early age of 3 to 5 years, low-income preschool children preferred the tastes of foods and drinks if they thought they were from McDonald’s, demonstrating that brand identity can influence young children's taste perceptions. - Pediatr Adolesc Med.

I was a little surprised the San Mateo County, CA experiment was limited to low-income kids, but the study author, Dr. Tom Robinson, allegedly believes the results would be similar for children from wealthier families.

Five foods were tested. The chicken nuggets, hamburger and french fries were all from McDonald's; the carrots and milk were from a grocery store. Kids sat behind a white screen, and were handed two identical samples of food, one coming out of a plain paper bag, wrapped in plain paper, while the other came out of a McDonald's bag, wrapped in similarily-labeled paper. If kids did not immediately recognize the symbol (around 25% of the time), a researcher would tell them which one was from McDonald's.

The independent variable in this case was the packaging for the food, while the dependent variable was the kid's preference of food. (Kids also had the option of saying the two samples tasted the same.) The researchers made great efforts to control their experiment, I recommend reading the methods section of the study to read the details. In fact, the whole study is pretty intense. For such a simple-sounding experiment, there is still a lot of serious scientific method involved. The write-up includes statements such as, "The 63 children performed a total of 304 individual tasting comparisons. Three, 2, 3, 1, and 1 child were not allowed to eat hamburger, chicken nuggets, french fries, milk, and carrots, respectively, and 1 child was unable to bite the carrots. "

The results?
As with any science experiment, the results inspire more questions and opportunities for further experimentation. Pradeep Chintagunta, a University of Chicago marketing professor, makes an excellent point when he said a more fair comparison might have compared kids’ preferences for the McDonald’s label versus another familiar brand, such as Mickey Mouse. It would be interesting to see if it is specifically the lure of McDonalds, or the power of any advertising that yields these results. And of course, I would be interested in the author's presumption that the results would be similar with middle- to upper-class children. Would early exposure to Whole Foods and fine dining make a kid less susceptible to McDonald's advertising?

Finally, the whole things makes me consider the power of advertising in older kids (and adults). All I have to do is consider fads like Ugg boots....