So, this was my first Halloween at an elementary school, and it was a day of wacky celebration. My favorite costume was that of a fellow science teacher. 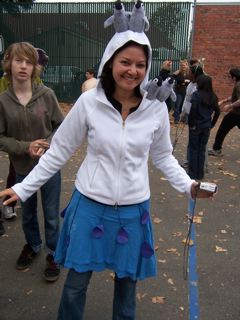 FRONT: You can see the drips on her skirt, the clue that this wasn't your everyday glacier costume. Even though scientists predict that melting ice will not threaten coastal communities for some time, there is incontrovertible evidence that ice is melting at a rapid rate. "Last year Eric Rignot ... calculated that Greenland lost a total of 54 cubic miles (225 cubic kilometers) of ice in 2005, more than twice as much as ten years ago—and more than some scientists were prepared to believe." 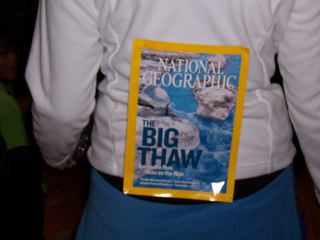 BACK: On her back, she displayed the June 2007 issue of National Geographic entitled The Big Thaw (The magazine also has a pretty cool interactive site where you can learn more about global warming.)

It's very interesting teaching in a Berkeley, CA school. The other day, I showed the 3rd grade class part of a YouTube video to introduce them to Rube Goldberg. I explained that I was only showing part of the video, since it was actually a 1940s advertisement for gasoline. ("Fortunately for us, man has discovered a virtually unlimited source of power... gasoline") I mentioned that I thought is was amazing that just 50-some years ago, there was such positive excitement around using oil.

One third grader raised his hand and said, "That's funny because in 2007 we know that burning gas causes pollution and that pollution affects the atmosphere, which causes global warming. So, the ice is melting in places around the world, and some polar animals are losing their habitats." Many kids nodded along. He continued, "But, my family has a hybrid car, so we are trying to make the problem a little bit better." After a bit of discussion, I learned that over HALF of the students had at least one car in the family that was a hybrid, electric, or ran on natural gas. Which reminds me of a sign I saw this weekend at a Berkeley street fair. 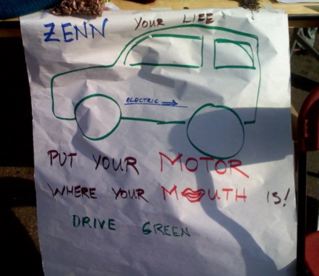