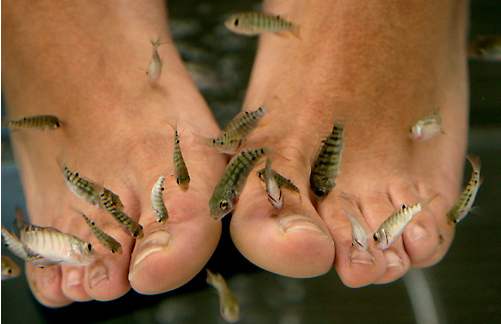 So, for hundreds of years, people could relax in the hotsprings of Turkey while fish gently nibbled on their skin. Apparently, it is so hot in these springs that not much can grow, so the fish are quite hungry. In comes a human with dry, flaky skin, and the fish see a feast before them. In the 1980's, Turkey began using these "doctor fish" to officially treat skin conditions such as psoriasis and ezcema. In 2008, a salon in Virginia became the first U.S. location to offer the fishy service.

Conveniently, these fish prefer affected skin, and will leave healthy skin alone. The fish can be of two different species: Garra rufa and Cyprinion macrostomus. Many scientists think that as the fish remove your dead, scaly skin, light and water can get to the healthy skin underneath, helping your body heal itself.

It sounds like a joke, but according to one study published by Oxford University Press, "Ichthyotherapy (therapy with the so-called ‘Doctorfish of Kangal’, Garra rufa) has been shown to be effective in patients with psoriasis in the Kangal hot springs in Turkey."

In Kangal, the water's high temperature makes it difficult for any nutrients to survive; the doctor fish are therefore ravenous. Handily, they also have a penchant for dead, diseased or scabby skin. With their gummy mouths they strike and lick the psoriatic plaques, eating away the scaly skin that has been softened by the warm spa pool. Their nibbles can cause minor bleeding, which the selenium-rich water and high-altitude Turkish sunlight then heals. (source)

Click here to watch a BBC news report on a fish doctor spa.
Posted by C. Mytko at 3:48 PM 1 comment:
Email ThisBlogThis!Share to TwitterShare to FacebookShare to Pinterest
Categories: animals

Well, it's been a while since my last post. However, a Steve Spangler newsletter I received in my inbox today inspired me with a link to what might be the most amazing video EVER! (OK, so maybe I am a little biased as a science teacher....)

In fact, with this Steve Spangler has certainly passed Bill Nye as my favorite science guy. Not only does Spangler do cool stuff, and have great products, but he also provides Teacher Training. (I will be attending his "Science Boot Camp" in Chicago September 25!)

And, you may not recognize Judson Laipply's name, but you will recognize his famous YouTube video, "The Evolution of Dance." I love it because it is entertaining, witty and the guy has talent.

Imagine my glee when I learned that Spangler & Laipply spent some time together at the Spangler Lab (read the story). This video is the result.