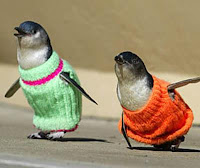 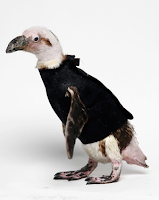 It's a great story. To learn more you can:
In 2009, another wet-suit-wearing Cal Academy penguin made the news. Ralph, a nine year old Humboldt penguin, also had a similar wetsuit experience.
Posted by C. Mytko at 10:51 AM 1 comment:
Email ThisBlogThis!Share to TwitterShare to FacebookShare to Pinterest

Today, a student introduced me to the Vlogbrothers (YouTube Channel). Hank and John Green are brothers who make nerdy videos. Hank lives in Montana, and John lives in Indiana, yet they still engage in nerdy collaboration across the miles.... Apparently, it all started in 2007, when the brothers chose to refuse text communicate and only communicated through voice and vlogs for the year.

The video below is one of Hank's songs, Strange Charm. It's about quarks. Quarks are a type of particle that makes up matter. Most of the matter we see around us is made from protons and neutrons, which are composed of quarks. The most recently discovered quark (the top quark) was announced in 1995! (A shout-out to Fermi National Accelerator Laboratory near Chicago, IL for the discovery!)

There are 6 types, or "flavors" of quarks: up, down, charm, strange, top, bottom. Each quark carries a fractional charge, and a color charge. (?!) According to the theory of quantum chromodynamics, quarks are always combined in groups of three quarks (of different colors) or as pairs consisting of a quark and an antiquark (of the same color). (??!!) This is more than my brain can handle, but it is pretty cool.

If you want to learn more about quarks, I suggest visiting the following sites:

Hank Green is also known for his blog, EcoGeek, which he began in graduate school as a class assignment!
Posted by C. Mytko at 10:16 AM No comments:
Email ThisBlogThis!Share to TwitterShare to FacebookShare to Pinterest

Bike performance on China's Got Talent

I live in a town that has a bike polo league, a synchronized bike ballet, and the Bay Area Dérailleurs, a bicycle inspired dance team... but I have never seen anything like this!

From China's Got Talent... 16 girls on a bike! Not to mention a lot of jumping and flipping. Incredible.

Thanks to the "related videos," I also learned about 23 year old Liu Wei from Beijing, who won the China's Got Talent Show on Oct. 10, 2010. He swims competitively, and plays piano... yet he lost his arms in an accident when he was 10 years old. His attitude & determination are inspirational. You can watch his amazing performance here.
Posted by C. Mytko at 6:33 PM No comments:
Email ThisBlogThis!Share to TwitterShare to FacebookShare to Pinterest
Newer Posts Older Posts Home
Subscribe to: Posts (Atom)