QR codes are popping up all over!

Oh man, this post is long overdue. I started it years ago in November of 2010, when I saw my first QR code on a billboard in the Denver airport. At this point, I had seen QR codes on my United mobile boarding passes for a while, but this was the first time I saw one of the codes "out in the wild," so to speak. 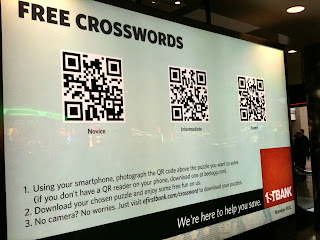 Soon, I was seeing them everywhere! Bus stops, actual buses, catalogs, advertisements, even on a sticker on a bike rack outside the local Chipotle. 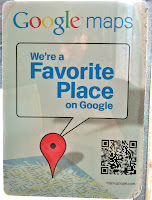 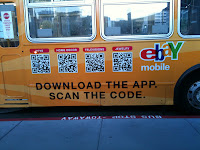 Then, in April 2011, Chicago CBS shared a QR code story and Richard Byrnes (Free Technology for Teachers) wrote an awesome post on QR codes. Heck, by April, even my mom knew what a QR code was! :) Researchers even had developed a QR code-based vending machine that accepts PayPal. I realized it was time to go back and dig out my notes.

And I finally did it. I got a QR code app. I checked out this Feb 18, 2011 blog post describing 5 of the current iPhone apps for scanning QR codes and bar codes. I decided on Scan. The first thing I did was use it to access the NSTA mobile site for the 2011 national conference in SF. (The second thing I did was scan that (unlabeled) sticker on that bike rack. It was some ad about smoking cessation.)
I've learned that QR stands for "Quick Response" and has been around since 1994. QR codes were originally created by a company called the Denso Corporation and these 2D bar codes have been popular in Japan for some time. (see 2007 blog post, 2009 blog post)

How do they work?

Well, if you have some time, read the Wikipedia article on this one. Or this blog has more specific information on the QR code design process. 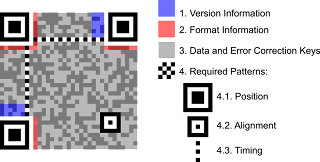 Image CC by Zephyris.
There are a few parts I can figure out:

Want to generate your own QR code?

There are many, many options to create your own QR codes. In Sept 2010, TechCrunch wrote a post about Google's new URL shortener. Apparently, if you simply add “.qr” to the end of any goo.gl URL, it will create a QR code. Scanning this with any QR code reader will take you to the URL. Then in October, Bit.ly released it's own version of Google's little trick. Just add “.qr” to the end of any bit.ly link (including custom URL's) to generate a QR code.

This summer, while I was cavorting around in Alaska, I learned that you can create QR codes with an image in the center! One of the resident techies aboard the ship recommended BeQRious as a reliable site to try this.

I like the simplicity of this site. In fact, I used it to make the QR code on the back of my new business cards. :)
Posted by C. Mytko at 4:12 PM No comments:
Email ThisBlogThis!Share to TwitterShare to FacebookShare to Pinterest
Categories: technology

Posted by C. Mytko at 4:36 PM No comments:
Email ThisBlogThis!Share to TwitterShare to FacebookShare to Pinterest

On November 4th, three new elements received their names. Of course, WebElements, periodic table on the web, was already on it! (Oh, and make sure to scroll down the WEbElements page and check out what the kids baked... I hope I have kids that cool one day. :)

Read about each new element:

What's interesting to me is that these elements were first observed in a laboratory in 1994, 1994, and 1996, respectively, yet it took until 2011 for them to receive names. I read this fascinating post (from 2002) about how elements are named. Even then, the author writes,

It was only in 1997 that the International Union of Pure and Applied Chemistry, or IUPAC, proposed names for 104 - 109. These elements were created in laboratories in the United States, Russia, and Germany. Only a few atoms were created and they only existed for a short time. The naming of chemical elements is a matter of national and professional pride, however, and selecting a name these days requires a lot of bickering and bargaining. Elements 110, 111 and 112 have been created, but have yet to be named.

I liked reading the post and leaning more about how elements have been named using Latin symbols, the compounds they make up, Greek words, how the element was made, the place name where it was synthesized, mythology, and most recently, after famous scientists.