The Boston Globe did a photojournal of the 2009 Sumatra earthquake. I've been holding on to this image for a while, and debating whether or not to post it. The picture below usually would make me laugh (since ducks are hilarious), if it wasn't so sad (salvaging what he can from the destruction). 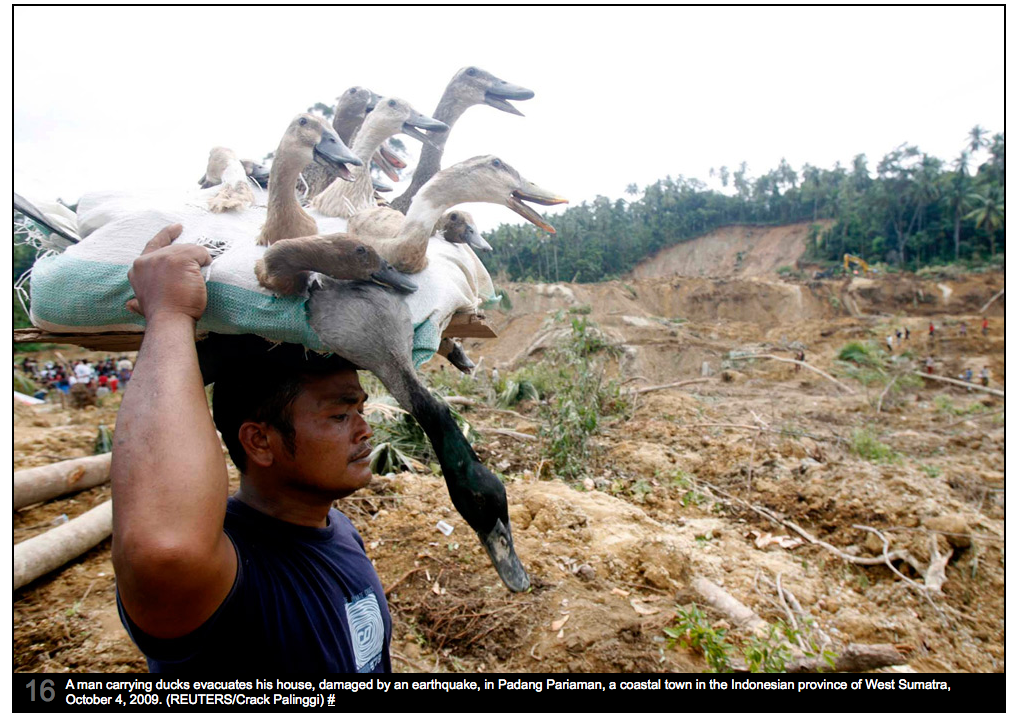 Events like these in Sumatra, and most recently in Haiti, remind us of the power of nature, as well as the good fortune so many of us enjoy.
If you haven't already, please consider making a donation to the Red Cross. You can text "HAITI" to 90999 and make a $10 donation to support the American Red Cross Haiti relief efforts. The donation will be debited from your cell phone bill.

A 48-hour-old fundraising campaign to help Haiti earthquake victims, done solely through text messages, was already stunning Red Cross officials on Thursday when it hit $3 million. By Friday morning, the tally had more than doubled.

Update 5:20pm: I have been alerted to the fact that these mobile donations can take up to 90 days to reach the Red Cross (CNN, Gigaom). Jonathan Aiken, spokesman for the Red Cross, says "The Red Cross already has cash on hand, so it's putting that money to work now and will replenish its coffers once the mobile donations are officially processed... That's how it's always worked," Aiken said. "So in a way it doesn't matter which exact date the money officially comes in. And in any case, we're still going to be in Haiti 90 days from now -- this is not going away anytime soon."

The Better Business Bureau recommends that consumers give to charity online, by phone or mail if they want the funds deposited immediately.

Posted by C. Mytko at 12:00 PM No comments:
Email ThisBlogThis!Share to TwitterShare to FacebookShare to Pinterest
Categories: animals, news

Interesting story in the Chicago Tribune about snowflakes:

Kenneth Libbrecht, [Professor of Physics at CalTech and creator of snowcrystals.com] has now defined more than 35 different shapes, from radiating plates to capped columns, to bullet rosettes. For snowflake-watchers who don't have a microscope handy, however, here's a beginner's guide to appreciating the snow.

TYPE OF SNOW CRYSTAL = The mash: As temperatures near 32 degrees Fahrenheit there is a greater mix of crystal formationss including plates, columns and dendrites. The structures are more compact, tend to stick together and are perfect for making snowballs and snowmen. "Now you?re getting into your heart attack snow," said CalTech physics professor Kenneth Libbrecht.

TYPE OF SNOW CRYSTAL = Columns and needles: These snowflakes tend to be relatively small and melt easily. "This is kind of forgettable snow," said Libbrecht. "These are kind of the sparrows of the snowflake world. They don't really jump out at you."

TYPE OF SNOW CRYSTAL = Dendrites: The most traditional-looking snowflake -- a stellar dendrite -- forms in higher humidity. It is perfect for skiing, light and fluffy. "These are your standard shopping mall snowflakes," Libbrecht said.

TYPE OF SNOW CRYSTAL = Plates and prisms: Plates and prisms tend to occur at very low temperatures and at low humidity. They make for very dry snow that scintillates in the sun due to the flakes' flat mirrorlike surfaces. Usually the snowfall is so light that no shovels are needed. "This is what I call diamond dust," Libbrecht said. "This stuff just sparkles."