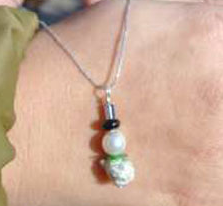 So, don't ever let someone tell you your ideas are silly. This holiday season, Bloomington's Miller Park Zoo has raised $20,884 by selling necklaces and ornaments made from reindeer droppings.

Last year, the zoo made about $5,000 selling reindeer-dropping ornaments. This year, they moved into necklaces after some people asked if jewelery would become available.

To make them, dime-sized pieces of reindeer poop are dehydrated, sterilized and spray-painted with glitter. They're called "Magical Reindeer Gems." (The image above is courtesy of a November post in this cool blog called L.A. Unleashed.)

The zoological society says the ornaments and necklaces were sold nationwide. And I LOVE this news bit: "Requests also came in from other countries, but federal regulations don't allow reindeer droppings to be exported." (!)

Unfortunately, these items are limited-edition... so maybe next year?

This story reminds me of another poop fundraiser. I taught high school back in 1999 in central Illinois. It was a learning experience... from kids bringing in their prize-wining goats for their science project to a kid who invited me to ride in his new air-conditioned combine. But, I thought the kids were pulling my leg when they told me about the "Cow Patty Derby."

For this fundraiser, the football field was divided into numbered 1 ft x 1 ft squares. Then people bought corresponding numbered raffle tickets. The night of the event, townsfolk gathered in the bleachers and they let a cow loose on the field. Now, this sounds more dramatic than it is, since the cow mostly just stood there and occasionally walked around. But, eventually, as all cows do, it needed to.. ahem ... relieve itself. So, it drops a cow patty in some random square, and the owner of that numbered ticket is the big winner!
Posted by C. Mytko at 11:44 AM No comments:
Email ThisBlogThis!Share to TwitterShare to FacebookShare to Pinterest
Categories: animals
Newer Posts Older Posts Home
Subscribe to: Posts (Atom)