This past Saturday was the Exploratorium's first "Educator's Night." Not only was there free food and drinks, but there was a special edition of the Iron Science Teacher*. I've previously competed in the event, and I was happy to volunteer again.

My secret ingredient was "chalk." This was a tough one for me. After discarding a number of boring ideas, I clinched the title (for the second time!) with chalk** chromatography. (And, of course, putting kids in costumes... works every time.) 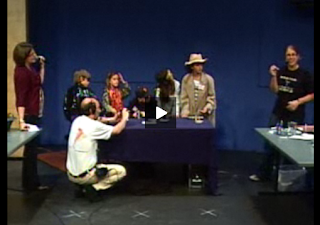 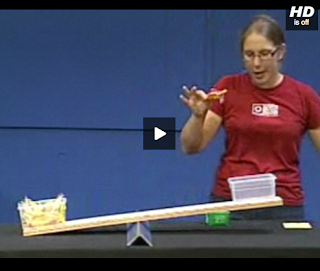 * Parodying the cult Japanese TV program, “Iron Chef,” the Iron Science Teacher showcases science teachers as they devise classroom activities using a particular ingredient—an everyday item such as a plastic bag, milk carton, or nail. Contestants are drawn from the Exploratorium Teacher Institute and compete before a live audience.

Apparently, back in 1997, the museum's high-tech webcast studio was looking for new shows. During a staff brainstorming session, a fan of the Japanese cooking show (which aired on a local television network, without subtitles, at the time) suggested naming a secret ingredient for science teachers to use in an experiment to present to the audience. "It was honestly and truly a joke," Linda Shore, Director of the Teacher Institute and host of the show, said, "We thought we'd do one show."

Now 10 to 12 shows are produced annually for the Exploratorium's Web site, many of them during summer institutes. "Secret" ingredients (which are actually revealed to participants in advance so they can practice) have included everything from ordinary baking soda and food coloring to Marshmallow Peeps and pantyhose.


** Seriously, I learned a lot about chalk. Most chalk produced today (I found out) is dustless - it still produces dust but the dust settles faster. "Manufacturers accomplish this by baking their chalk longer to harden it more. Another method, used by a French company, is to dip eighty percent of each dustless chalk stick in shellac to prevent the chalk from rubbing off onto the hands." This almost ruined my experiment!!!! (Cheap, not dustless, chalk pictured below.) 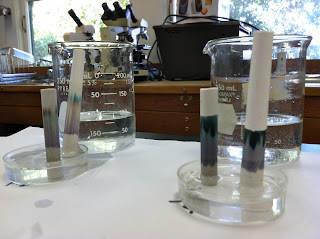 I also learned that the first true chromatography is actually attributed to a Russian scientist who used a liquid-adsorption column containing calcium carbonate to separate yellow, orange, and green plant pigments. He first used the term chromatography in print in 1906 in his two papers about chlorophyll! Conveniently for science teachers, calcium carbonate has traditionally been a major component of blackboard chalk. (Although modern chalk is now mostly gypsum.)

One last random fact: There is currently no Wikipedia page for the Iron Science Teacher... this has to change. :)

UPDATED OCT 4: Now, there IS a Wikipedia page for the Iron Science Teacher. The first Wikipedia article I've created "from scratch"! :)
Posted by C. Mytko at 7:27 AM No comments:
Email ThisBlogThis!Share to TwitterShare to FacebookShare to Pinterest

Talk about your viral videos... I recently received a link to one of the most innovative billboards I've learned about.

In support of Academy Award ® winner Steven Soderbergh's latest film "Contagion" -- in theatres September 9th, Warner Bros. Pictures Canada teamed up with microbiologists and immunologists from around the world to create a one-of-a-kind bacteria message board located at 409 Queen Street West [Toronto, Canada] in an abandoned store-front window. On August 28th, two large Petri dishes were inoculated with live bacteria including penicillin, mold and pigmented bacteria and almost overnight have revealed the true Contagion -- an artistic interpretation of the spread of a virus as depicted in the film.

Wow! You can visit the Contagion's IMDd page for more info on the movie itself, including the trailer. I am a big fan of virus movies... my favorite being the 1995 film, Outbreak.

The movie was filmed in Atlanta, Georgia (no doubt near or in the CDC) and San Francisco. In fact, one day in February 2011, I was riding down Polk St. and was forced to stop. Apparently, they were filming Contagion in downtown SF that afternoon. It was cool, but also a little scary - military personnel, and long lines of people waiting to get into the imposing "MEV-1 Vaccination Center" (normally the Civic Auditorium)... 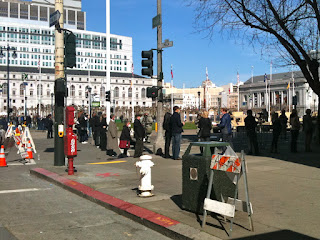 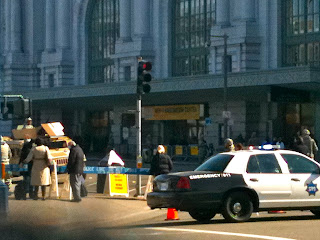 I was surprised to learn that Contagion was actually filmed at both my "homes" - the Bay Area and Chicago - at Central Elementary School (Wilmette, IL), Midway Airport, Sherman Hospital (Elgin, IL) and various other places in Glenview, Naperville, Waukegan, Western Springs & Chicago itself! (Oh, and Hong Kong & Los Angeles, but I am not connected to those places, so I am less excited about those shots.)

Anyway, back to science...

If you want to learn more about how agar is poured into petri dishes and inoculated with bacteria, you can watch this Steve Spangler video below. Then imagine it on the large scale of those billboards!