So, there was a contest sponsored by the Chicago Tribune to find the "greenest person in Chicago."

Ken Dunn, 65, of Hyde Park, is so green that he beat out 11 other finalists, identified with the help of local sustainability groups, to be named the greenest person in Chicago by the Tribune. He beat:
Intense.

Dunn produces only 3,800 pounds of carbon dioxide a year, as compared with the 44,000 pounds produced by the average American.

Stated another way, Dunn is already living at roughly the level of carbon emissions that scientists at the UN Intergovernmental Panel on Climate Change say the average human must achieve by 2100 if we are to avoid dangerous effects of global warming.

But check out this second-place finisher, Sayre Vickers, 32!

Dunn could share his home heating bill—and split the associated carbon emissions—with three people who live beneath him. However, Vickers lives alone in Garfield Park. Vickers grows tomatoes, basil, wild spinach, kale and peppers in front of the sunny windows of his apartment and makes his own furniture from discarded wood. With no running water, he hauls his 3 gallons a day from the bathroom one floor below.

The toilet is a bucket, with a 30-gallon garbage can nearby for storing human waste layered with sawdust. Vickers has a friend in the suburbs who allows him to park the cans when they fill up. The contents decompose, forming compost.

In keeping with the claims of the Humanure movement, which promotes composting as an alternative to waste-generating flush toilets, the smell is undetectable from even a foot away.

UPDATE: As of 2009, another Chicago resident is trying to help composting toilets catch on in Chicago.
Posted by C. Mytko at 5:37 PM No comments:
Email ThisBlogThis!Share to TwitterShare to FacebookShare to Pinterest
Categories: Chicago, environment

Now, if you live under a TV-free rock like I do, it is possible that you didn't know (or didn't care) that the 60th Annual Emmy Awards were on TV last night. However, when I read in the online news that Josh Groban sang a TV theme medley, I had to check it out.

If you aren't familiar with Josh Groban, he's a singer-songwriter who focuses on classics and generally can be found on the adult contemporary charts. He has an amazing tenor voice. Here's an example of his music.


A fan site is quick to point out, however, that although Josh seems serious, he really is a typical 20-something.

Because of the classical influences in his music (which in the beginning appealed mostly to an older audience), some people have the mistaken impression that Josh is a suit-and-tie, pristine guy who acts more like a 50 year old than a 27 year old. Wrong! While Josh definitely has a maturity beyond his years and a load of discipline for someone his age, he enjoys the same things most 20-somethings do; He listens to Radiohead, Bjork, Depeche Mode, and the Afro-Celts, he likes Monty Python and South Park. He likes to hang out with his friends, surf the Internet, and play video games.

I was VERY entertained to see his Emmy performance!

This is the epitome of randomness. I'm used to seeing him sing soulfully into sunsets, and now he's rapping to the Fresh Prince? I wonder if this was fun for him, or if it made him roll his eyes.
Posted by C. Mytko at 8:50 AM No comments:
Email ThisBlogThis!Share to TwitterShare to FacebookShare to Pinterest
Categories: misc 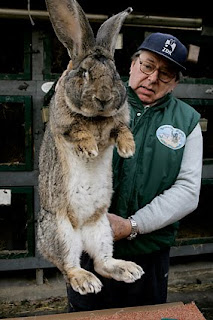 Karl Szmolinsky, who raises a breed of rabbits called giant grays, shows Robert, an 8.5kg giant gray who is 74cm long and has ears 25.5cm long, in the backyard of his house in Eberswalde, Germany in 2006. Szmolinsky sold eight giant grays to a delegation from North Korea that wanted to raise the breed as a source of meat for the North Korean population. Szmolinsky said his rabbits reach a maximum weight of 10.5 kg (23.1lbs.).
Posted by C. Mytko at 7:19 AM 4 comments:
Email ThisBlogThis!Share to TwitterShare to FacebookShare to Pinterest
Categories: animals

Wow. Check out THIS treehouse. It's nicer than most of the apartment's I've lived in! It has doors, windows, electricity and a spiral staircase! Wisconsin father John Peterson drew the line at running water, however, even though "he thought about it."

Not everyone is celebrating. The TreeHugger blog writes, "That icon of American childhood, the treehouse, has succumbed to the McMansion phenomenon."

I think it's kinda cool. And impressive that the guy built it himself!
Posted by C. Mytko at 6:26 PM 1 comment:
Email ThisBlogThis!Share to TwitterShare to FacebookShare to Pinterest
Categories: misc
Newer Posts Older Posts Home
Subscribe to: Posts (Atom)