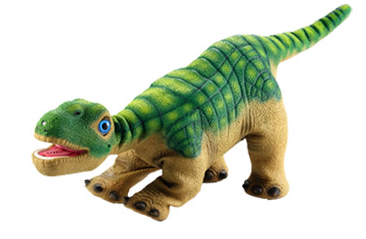 There is a new toy in town, Pleo brought to you by Ugobe. This company's inventor and co-founder is Caleb Chung, the same guy who co-invented the Furby 1n 1998. Pleo has 14 motors and six processors (Furby had one of each), a nose-mounted camera and 30 sensors. It's sensitive to touch, noise, movement, and even other Pleos.

Pleo is a lovable one week old baby Camarasaurus, a gentle and loving plant eating dinosaur from the late Jurassic Period of our planet’s history. Ugobe used and researched actual Camarasaurus fossil records to help them model Pleo’s appearance and behavior. (source)

The news releases started in 2005, with its much-delayed release happening on December 18, 2007. This robotic pet costs $349, but current owners seem to think its worth it. People are obsessed with these! There are Pleo videos, songs, skits.... owners can even keep a Plog about their robotic pet.

In this March 13th, 2008 Nightline episode, newscasters describe Pleo as "straddl[ing] the line between pet and product."

You can get a tour of the Ugobe labs, in this first webisode in the Ugobe series of videos titled "Behind The Scenes: The Making of Pleo."

You can see the rest of the videos in this 6 video series by visiting the website.

Pleo is based on the three laws of Ugobe life forms.

Isaac Asimov, who is credited for coining the term robotics in his short story Runaround published in 1942, also had his famous 3 laws of robotics (which Pleo appears to follow):

(He later added a Law Zero: A robot may not injure humanity, or, through inaction, allow humanity to come to harm.)

Besides the amazing advances in robotics that Pleo displays, it is just plain cute. In fact, you could waste hours surfing YouTube for Pleo videos. Here are a few to get you started:

Pleo (without skin) at the Maker's Faire
Pleo making other animal noises
Synchronized Pleos?
Pleo riding on a Roomba

You'll notice that the people obsessed with these toys are adults. In fact, techies everywhere can rejoice in knowing that you can program Pleo using the Pleo PDK as well as a variety of 3rd party tools. "Complex Pleo programming will require a knowledge of the C programming language and a comprehensive understanding of Pawn scripting and the UGOBE Life OS." (source) Umm... that doesn't sound like the skills of your average 4 year old.

Where else would you expect this toy to be developed but California? In Emeryville, CA to be more exact. I drive through the town every morning on my way to work!
Posted by C. Mytko at 9:48 AM 1 comment:
Email ThisBlogThis!Share to TwitterShare to FacebookShare to Pinterest
Categories: inventions, misc

No, I refuse to title my blog post "Got Milk?" Although it is tempting. This morning, a tractor trailer loaded with 14 tons of double-stuffed Oreos slammed into the median and overturned. The driver was driving down Interstate 80 around 4 am from Chicago to Morris and may have fallen asleep at the wheel. I can relate. That is one long, boring drive.

Though I'd like to image otherwise, the video shows a rather tame scene. Apparently, all of the cookies stayed inside their plastic wrappers.