My roommate casually mentioned an Art Car Fest over dinner a few days ago. Conveniently, my morning science classes were canceled today, so I went. I was floored by a car full of singing fish. There are few things more random that that. Of course, my first question was, how did they make that?

In fact, the experience inspired my first YouTube video upload. :)

Posted by C. Mytko at 4:42 PM No comments:
Email ThisBlogThis!Share to TwitterShare to FacebookShare to Pinterest
Categories: misc

a lizard in a lizard 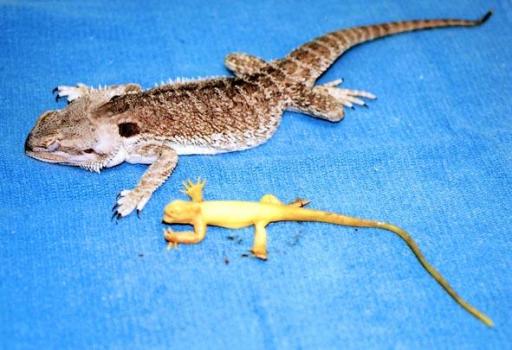 (Imagine my surprise when I realized I already have a previous post about reptiles swallowing unusual things.) Anyway, this story is a new one for me....

Things got pretty weird in Jacksonville, Florida, when a 7 year old brought her pet 12-inch bearded dragon to the animal hospital. She thought it was having a baby. (This would be a problem, since bearded dragons lay eggs.)

At the animal hospital, veterinarian John Rossi sedated the lizard and began to pull on the obstructions.

"The next thing I knew, I was seeing legs and a body and a head. It was very strange to be tugging on this thing," he said. By the time the rubbery lizard's legs began to appear, Rossi realized what it was.

"We were all laughing," he said. "It passed completely through the entire (gastrointestinal) tract," Rossi said.

Her pet had swallowed a 7 inch rubber lizard. Whoa. The rubber lizard was a little over 58% the length of the lizard. Imagine if you swallowed a 3 foot rubber human....
Posted by C. Mytko at 3:45 PM No comments:
Email ThisBlogThis!Share to TwitterShare to FacebookShare to Pinterest
Categories: animals
Newer Posts Older Posts Home
Subscribe to: Posts (Atom)