do not park here

There are a wide variety of No Parking signs on the garages of San Francisco. Some are visual, some are in more than one language, many have some little play on words. However, this may be the most unusual sign yet. (San Francisco, 18th St.) 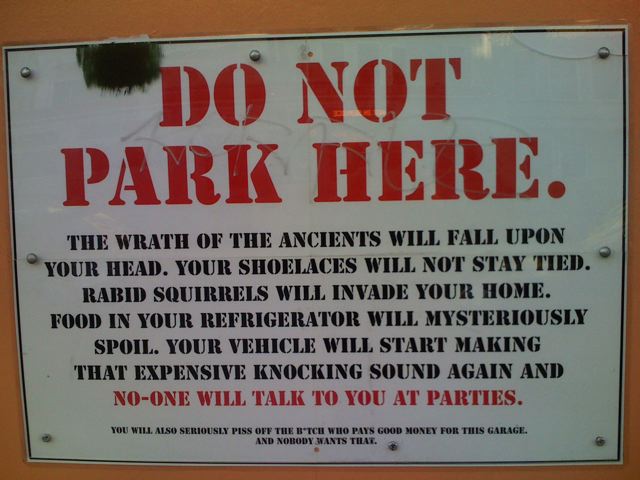 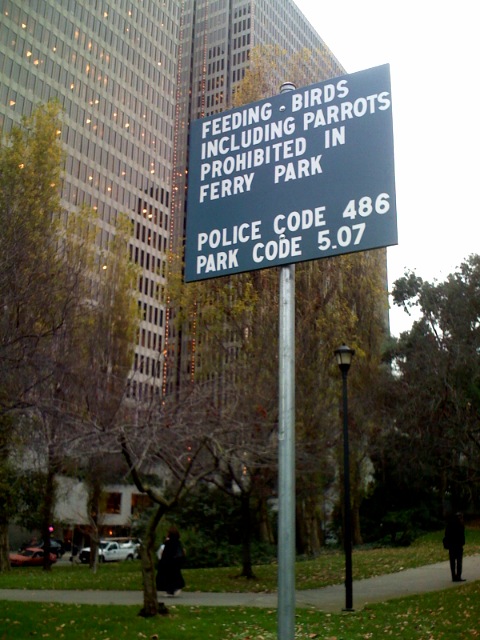 Well, this was not a sign I expected to see in the middle of the city. But it is true - there is a flock of wild parrots that make their home in San Francisco. Actually, there are TWO flocks of birds in the city, but this park is often home to the famous "Wild Parrots of Telegraph Hill." (The scientific name is Aratinga erythrogenys, also known as a cherry-headed conure, among other names.) This species comes from the west side of the Andes in southern Ecuador and the extreme north of Peru.

Resident Mark Bittner maintains a website promoting his book, his film, and general information on these birds. He also was integral in creating this law in 2007, banning the feeding of the birds.

From Bittner's site, I also learned that there is a wild parrot flock in Chicago, Illinois! (First spotted in 1973 in the Hyde Park neighborhood.)

Posted by C. Mytko at 4:00 PM No comments:
Email ThisBlogThis!Share to TwitterShare to FacebookShare to Pinterest
Categories: animals, signs

merriam-webster's word of the year: w00t

As if the 2007 word "locavore" was not exciting enough, Merriam-Webster announces their 2007 word of the year - w00t!

Gamers commonly substitute numbers and symbols for the letters they resemble, Morse says, creating what they call "l33t speak" — that's "leet" when spoken, short for "elite" to the rest of the world.

Is this the first word in the dictionary containing digits? :)
Posted by C. Mytko at 9:31 PM 1 comment:
Email ThisBlogThis!Share to TwitterShare to FacebookShare to Pinterest
Categories: words

Wow! The Vegetable Orchestra performs on instruments made of fresh vegetables. It was founded in 1998 and is based out of Vienna.

According to the website, at the conclusion of each performance, the audience is offered bowl of vegetable soup.
Posted by C. Mytko at 11:17 PM No comments:
Email ThisBlogThis!Share to TwitterShare to FacebookShare to Pinterest
Categories: food, misc

oxford word of the year: locavore

Well, the New Oxford American Dictionary recently announced its "Word of the Year."

A "locavore" buys food from farmers’ markets or grows the food him- or herself. This is partially because locavores claim local food tastes better and is healthier, but also to avoid the environmental costs of shipping food over long distances.

“The word ‘locavore’ shows how food-lovers can enjoy what they eat while still appreciating the impact they have on the environment,” said Ben Zimmer, editor for American dictionaries at Oxford University Press. “It’s significant in that it brings together eating and ecology in a new way.”

“Locavore” was coined two years ago by a group of four women in San Francisco who proposed that local residents should try to eat only food grown or produced within a 100-mile radius.

(I recently ate at a San Francisco restaurant, Fish and Farm, which focuses on sustainable and organic food. Fish and Farm grows all its own herbs and its produce is organic and sourced within a 100-mile radius. Also, whenever possible, so are their meats. ) 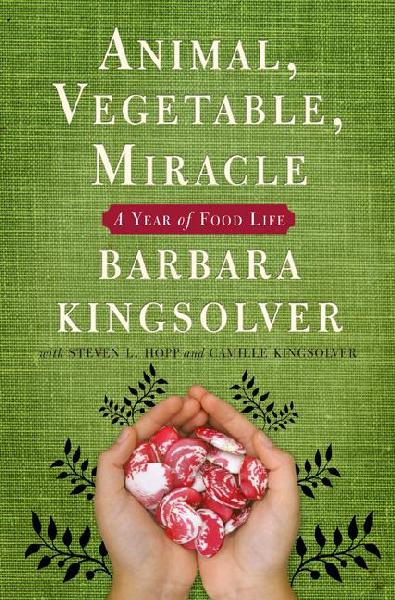 This is especially interesting for me, since I just finished reading Barbara Kingsolver's Animal, Vegetable, Miracle, published in May of this year. A combination of this book and living in California with locavore roommates has ignited my interest in local and seasonal food. The book itself chronicles one family's experience as they move to Appalachia to experiment with eating locally for one year. I found myself laughing at their adventures with squash surplus and turkey sex. But more importantly, I found myself thinking about food seasonally and considering the environmental effects of having bananas in December. (Many people want carbon cost labeling on food products.) Most surprisingly, I found myself trying out the recipes at the end of each chapter. And, I ate a persimmon (seasonal in November) for the first time in my life.

Being carbon neutral involves calculating your total climate-damaging carbon emissions, reducing them where possible, and then balancing your remaining emissions, often by purchasing a carbon offset: paying to plant new trees or investing in “green” technologies such as solar and wind power.