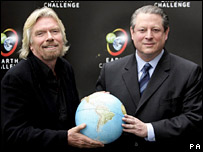 A British billionaire Richard Branson teamed up with Al Gore to offer a $25 million prize to anyone who can develop a way to remove carbon dioxide gas from our atmosphere.

Gore and Branson said that although scientists are working on technologies to capture carbon dioxide and other greenhouse gases at power plants and other industrial sources, no one has developed a strategy to remove gases already released into the atmosphere.

The winner of the contest must devise a plan to remove greenhouse gases from the atmosphere without creating adverse effects. The first $5 million would be paid upfront, and the remainder of the money would be paid only after the program had worked successfully for 10 years.

Another article tells that "Scientists have been looking into removing the greenhouse gas from the atmosphere and storing it in oil and gas fields, injecting it deep into the ocean, or chemically transforming it into solids or liquids that are thermodynamically stable."

So what exactly is up with all this talk about "greenhouse gases" like carbon dioxide? 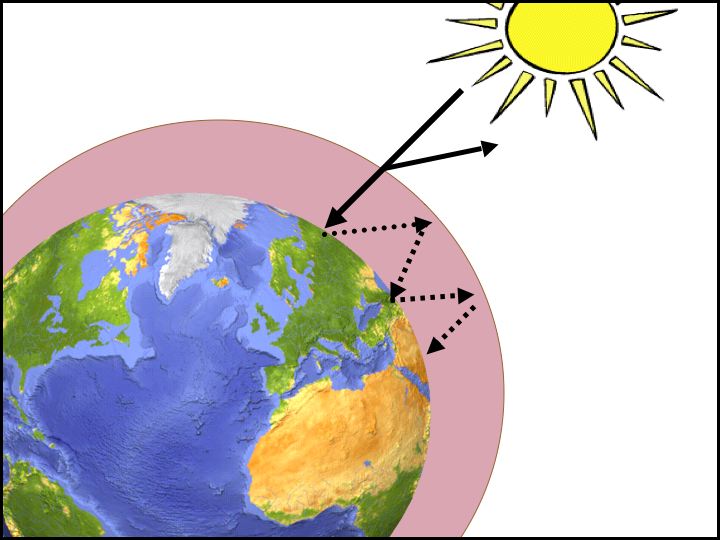 The greenhouse effect is responsible for the Earth being warm and for us being able to live there. Gases in the atmosphere surround the earth and trap heat, just like the glass in a greenhouse traps heat for plants and flowers. The Earth is about 60° F warmer than it would be without these protective gases.

The sun sends light and radiation toward Earth. When the sun's rays reach the atmosphere, some of the radiation bounces off the layer of gases and back into space. Some of the sun’s rays pass through the atmosphere and are absorbed by the land and water. The Earth changes this radiation to heat.

“Greenhouse gases” take in any extra radiation and release more heat, which also raises the temperature of the Earth's surface. This is how greenhouse gases “trap” heat to warm our planet.

Or, if you prefer, watch this animated guide to the greenhouse effect.

Since I do not foresee us not driving cars, building buildings or heating and cooling our homes, maybe Branson has a good idea. If getting people to stop producing carbon dioxide is a daunting task, why not develop ways to get rid of it once we produce it? NASA/World Book has great information about alternative energy sources (not creating so much carbon dioxide) and carbon sequestration (getting rid of it once we produce it).

Anyone looking for $25 million can get more information here.
Posted by C. Mytko at 7:34 PM
Email ThisBlogThis!Share to TwitterShare to FacebookShare to Pinterest
Categories: environment, news, science