When I read that two new whale sharks arrived at the Georgia Aquarium on Friday, June 1st, while the recently-born beluga whale is making plans to leave the Shedd Aquarium in Chicago some time this summer, I couldn't help but wonder - how do you transport these giant animals? 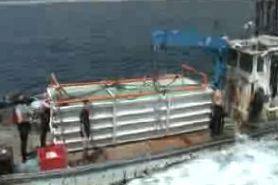 Well, the two whale sharks were flown 8,000 miles from Taipei, Taiwan on a specially-designed cargo plane with 20-foot-long fiberglass tanks with oxygen machines and other equipment to keep them healthy on their trip. When they arrived in Atlanta, Georgia, their tanks were transferred to two flatbed trucks and driven to the aquarium surrounded by an escort of Atlanta police cars with their blue lights flashing. (video) They will join three other whale sharks in their new home in a 6 million gallon tank.

Qannik, the male Beluga whale born back in August, 2000, is leaving Chicago and heading for Tacoma, Washington's Point Defiance Zoo. Qannik's mother, Mauyak, is pregnant again and expecting the new calf this fall. The mother/son bond between Qannik and Mauyak has all but disappeared as he grows into a sexual mature adult, and he must leave the facility to avoid interbreeding between him and his mother. Qannik is now 11 feet long and weighs about 1,000 pounds. In his new home, he will live in a whale pool with Beethoven, a 14-year-old 1,600-pound male beluga.

Qannik will travel in a specially-designed freight plane, riding in a "custom-made, fleece-lined sling suspended in a shallow tank of ice water." Trainers at the Shedd have been putting Qannik in and out of the sling repeatedly this year, using it for check-ups and exams, which will help Qannik be more comfortable with the device during his trip.

The aquarium kept the timing of Qannik's move under wraps to stave off protests, officials told The News Tribune of Tacoma for a story posted on the paper's Web site Sunday.

The whale traveled inside an "enormous, foam-padded plastic tank in the DC-8 plane for a flight that cost $84,000." The zoo website has posted photos of Qannik's adventures!

Fiberglass animals are a popular kind of arts & crafts suitable for the decoration of indoor surroundings and outdoor area of home garden, theme parks, watermarks , resorts etc. Moreover, they are equally popular in children as well.