Back in October, I had an opportunity to go to Wonderfest held at Stanford University. There I heard David Deamer, Professor of Chemistry at UC Santa Cruz, talk about and play his DNA music.

Remember that DNA stores the instructions for making you! DNA forms a "double helix" - a kind of twisted ladder in which the "rungs" are made up of nitrogenous bases (A, T, G, or C). A group of 3 of these base pairs is called a codon. Codons tell a cell what amino acid to build. Amino acids are the building blocks of proteins, and proteins are what make the body grow and do a lot of things.

We have a huge amount of DNA in each of our cells. If the DNA from just one of your cells was typed in books, a list of the 3 billion base pairs would fill 200 telephone books. That is from just one cell - and we have trillions of cells in our bodies, and most cells have a complete set of DNA! (kids genetics)

Anyway, in his presentation, Deamer says, "If melodies are a sequence of notes, and DNA is a sequence of bases, maybe we can turn DNA into music." He went on to compose pieces with the following translation.

For example, the insulin gene is coded "TTT GTG AAC CAA..." and so on. The DNA code dictates the notes played, but he does have some freedom with the timing. 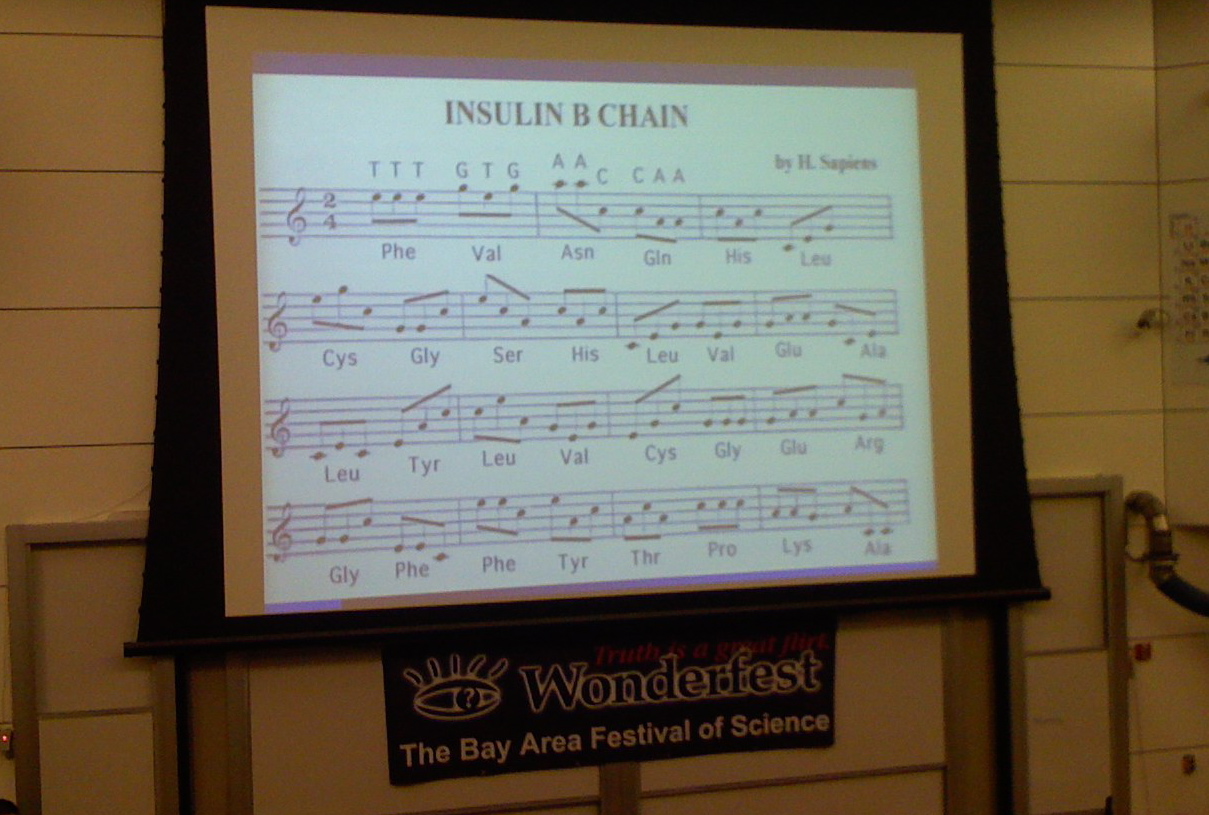 You can hear the music if you watch the Wonderfest presentations online. Not surprisingly, it is also posted on YouTube. Fast forward to 16:00 if you would like to hear the part about insulin.

In SEQUENCIA, raw data derived from the light absorption spectra of the four bases (adenine, cytosine, thymine, guanine) that make up the DNA molecule is converted into sonic frequencies. These are programmed to a Macintosh computer and sent to a synthesizer, and then arranged into four pitch collections (or four 'scales' based on the individual base molecules). These synthesized notes mixed with vocals, cello, tabla, and violin become the palettes for Alexjander's compositions, which range from somber and zen-like to fanciful and improvisational.

Another link gives specifics on the physics involved in this process.
Posted by C. Mytko at 3:56 PM
Email ThisBlogThis!Share to TwitterShare to FacebookShare to Pinterest
Categories: misc, science