The Obamas are planting a garden!

Promoting healthy eating for American families has become a part of the Michelle Obama's agenda. She said she was inspired by her own experience as a working mom feeding her girls convenient, but less healthy, meals. She has vowed to raise awareness of the difference a healthy diet can make.

The entire Obama family will be involved - even President Barack Obama will help with weeding!

To start the project, twenty-three fifth graders from Bancroft Elementary School in Washington helped break ground on the 1100 sq. ft. garden. (see diagram below). These students will be invited back to help plant, harvest and cook with the vegetables and herbs.

There are 55 varieties of vegetables, as requested by the White House kitchen staff. Some of the vegetables include: spinach, chard, collards, black kale, arugula, cilantro, tomatilloes, broccoli, various lettuces, assorted herbs and blueberries, blackberries and raspberries. But no beets. The President doesn't like them. There will also be a beehive and Michelle Obama hopes to be able to make their own honey. 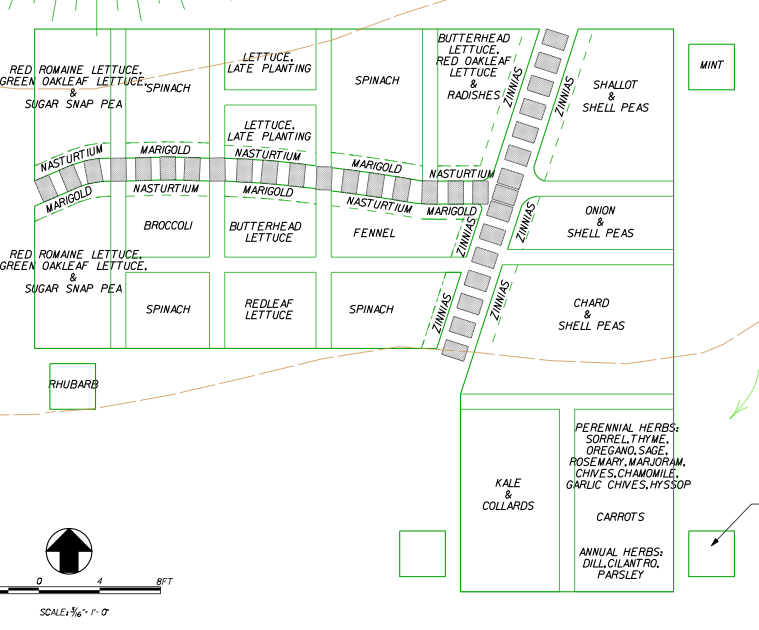 Some White House garden history: In 1800 John Adams, the first president to live in the White House, planted a garden. Eleanor Roosevelt planted a Victory Garden during the World War II (read FDR's statment). The Clintons had a small rooftop garden where they grew vegetables and herbs in pots.

Alice Waters (you may recognize her as the head chef at Chez Panisse!) has been lobbying the White House to plant such a garden for more than a decade. (She also designed the Edible Schoolyard program at Martin Luther King, Jr. Middle School in Berkeley.)

The White House chefs will use the the produce to feed the Obama family and for official events. And in the spirit of service, some crops also will be donated to Miriam's Kitchen, a soup kitchen near the White House where Michelle Obama has recently volunteered.

Read more about the garden:

I think it is wonderful that the presidential family does this. Hopefully they will set an example.

Yes. Really fantastic idea! This is one of the coolest things I've ever seen. Thanks for sharing. keep posting!