I got to play with bioluminescence this weekend!  Some friends invited me out on a short kayak trip and we able to experience the magical glowing water firsthand!  But, of course, it wasn't magic... it was science!

Bioluminescence is the production and emission of light by a living organism.  The name comes from the Greek word bios for “living” and the Latin word lumen for “light.”  So, put it together and you have “living lights"!  Animals most often use bioluminescence to communicate with each other, to find mates, to catch prey or to defend themselves.  You may be most familiar with bioluminescence from fireflies - though other organisms can produce it, including squid, deep-sea fish, some bacteria and even mushrooms!  However, dinoflagellates (single-celled protists) are the most common source of bioluminescence.

I've heard about this phenomenon in Puerto Rico.  On the southern shore of the island of Isla de Vieques, there is a bay called Puerto Mosquito (Mosquito Bay).  Apparently, this bioluminescent bay has been officially declared the brightest recorded in the world by Guinness Book of World Records 2008.  Check out this video - the part about the glowing water is 1:38 -  2:12, though the rest of the video has some INCREDIBLE footage of a cuttlefish. (This particular dinoflagellate is Pyrodinium bahamense.)


There is also some incredible footage of luminescent algae (dinoflagellate) blooms in Southern California, where the waves appear to glow!  (This particular dinoflagellate is Lingulodinium polyedrum)


I have also had the opportunity to see some bioluminescent organisms at the Marin Headlands - Noctiluca scintillans in the sand!


But little did I know this also occurred right here in northern California in Tomales Bay!  According to the Blue Waters Kayaking site, "bluish flickers are visible in the water column, which come from blooms of bioluminescent "dinoflagellates". These tiny creatures emit short flashes of light when disturbed, and at certain times of the year put on quite a show for kayakers. Schools of fish in the bay create a phosphorescent trail which can look like a glowing cloud in the water. Seals chasing the fish may create a phosphorescent event which can be very exciting to watch. … All this glowing activity is only visible at night when the sun and moon are both down. In 2012, this will be the case on the days July 21, July 28, August 11, August 18, August 25, September 8, September 15, September 22, October 6, October 13, October 20 from sunset until the moon rises."  (You should go!)

In the daylight, we saw pelicans, sea jellies, seals, and even a bat ray!  By 9:30 pm, the light show had begun.  Along the edges, where the water met the sand, you could see little glowing spots.  Once we pushed off in the kayaks, we could see an eerie glow emanating from the bow of each boats as it moved through the water.  Paddling created swirling, glowing eddies.  Fish, as stated above, made themselves known by the glowing streaks they left in the wave of their movements.  And, perhaps most fun of all, dangling your fingers over the edge of the boat created all sorts of glowing patterns... splashing made a liquid fireworks display!


Why only those dates?

According to the Vieques site, the best time to observe the bioluminesence aligns with particular phases of the moon, between full and new moon, to be exact.  Other sites are more vague, for example, "bioluminescence is only present for a couple of months a year when the variables all align: water temperature, air temperature, winds, currents, and tides."

However, the moon phase connection makes sense.  You want it to be very dark with little to no moonlight.  Yesterday, on August 11, the Moon rose at 12:57 am and set at 3:47 pm, leaving our ideal viewing time (around 9 - 10 pm) without any moonlight.  The Moon's phase was waning crescent, partway between a 3rd quarter (moon rise at midnight, moonset at noon) and new moon (moonrise at sunrise, moonset at sunset).

My roommate and I also discussed the fact that it may have to do with the wind.  She says it is much foggier lately because of the cold upwelling (read more if you are interested).  This same upwelling brings nutrients to the surface, providing good conditions for dinoflagellate population growth.  And according to this sobering article about the effect of climate change on coastal ecosystems, the most intensive upwelling occurs in Tomales Bay during the summer, "in response to strong, often persistent northwesterly winds."  This also aligns with the dates the bioluminescence is best viewed.


What's making all the glow?

Why do they do it?

SHORT STORY: There basically needs to be a chemical mix of a luciferin (a "light-producing substance") and a luciferase (an enzyme that helps the interaction among luciferin, oxygen and water) to produce a new substance that emits light.  When a dinoflagellate is disturbed, these substances are mixed in the cell and emit light.  (kind of, but not exactly, like how a glo stick works)

LONG VERSION: According to some studies, including this one, here is the general idea of how this reaction goes down:  Inside the cells, luciferin is packed in vesicles called scintillons.  This luciferin is produced throughout daylight hours.  The luciferin is usually bound to a protein called a Luciferin Binding Protein or LBP. At a neutral pH, LBP stabilizes the luciferin from being spontaneously oxidized.

When movement of surrounding water bends the cell membrane, it sends electrical impulses around the vacuole - which holds a bunch of protons (why?  I don't know).  These electrical impulses open proton channels, and those protons can now move from the vacuole into the cytoplasm (where the scintillons are kept).  The cytoplasm becomes acidified, and the process is activated in the scintillons.

When the pH drops to around 6, the luciferin and the LBP dissociate. In the process of being oxidized, luciferin briefly exists in an excited state, after which it decays to the ground state- releasing energy in the form of light.  The oxidation of the luciferin by the luciferase results in inactive oxyluciferin.  This reaction can happen more than once, but once the luciferin is used up, that dinoflagellate is done for the night, until it can replenish its supplies the next day.

Ready for the NSF image?  (It's government work, so it should be in the public domain.) 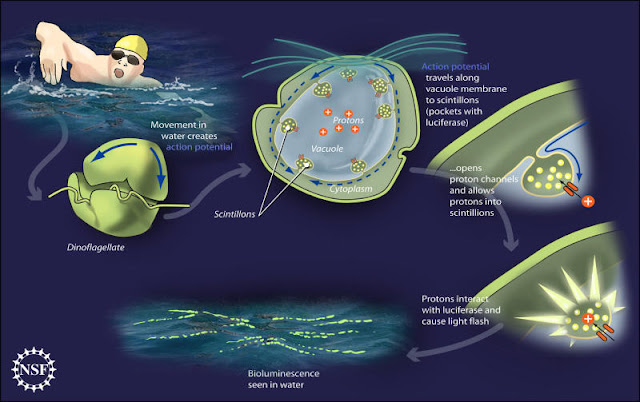 If you want to read more, or know where I got my information, you can check out this source (although I am not sure as to its reliability), or you can read the HowStuffWorks article on bioluminescence - esp this page, which has the more technical details of the chemical reactions.  Or, this Science Daily article is pretty good.  And if that's not technical enough, you may want to visit this UCSB biolum page for more information than you'll ever need. :)


Can I get some dinoflagellates and make them glow?

Yep.  Last year, some of my students did their science fair project on bioluminescence.  So, I bought some dinoflagellates (Pyrocystis fusiformis) from Sunnyside SeaFarms.  They basically do this: 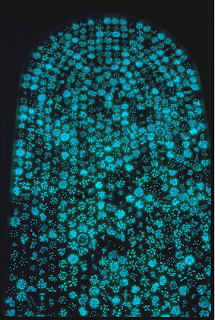 Check out this art installation using bioluminesence (although using bacteria, not protists).  (From the NSF site) "This arch was composed with Petri dishes painted with bioluminescent bacteria. The piece--approximately 9 feet high by 5 feet wide--was installed in December 2002 at the O'Malley Library, Manhattan College, Riverdale, N.Y.  "Bioglyphs" was an exhibition of living bioluminescent paintings that brought science and art together in the form of a collaborative project involving students from the MSU School of Art, and science and engineering students from MSU's Center for Biofilm Engineering (CBE)."  (read more about the project)

That is about as cool as that giant petri dish Contagion billboard!

UPDATE 8.21.13:  Yonder Biology started a Kickstarter campaign to create a Dino Pet, a "dinosaur-shaped habitat for a species of bioluminescent marine algae that photosynthesizes during the day and glows at night."  Hilarious! Update 2019: Biopop is no longer in business.
Posted by C. Mytko at 3:34 PM
Email ThisBlogThis!Share to TwitterShare to FacebookShare to Pinterest

Thanks so much for this explanation. I was in Alaska last week, and when I saw this phenomena take place I was floored and searching for answers!

Thank you! I'm planning a trip to Vieques with my husband and two boys this April, and your explanation enlightens (pun intended) and excites us about what we hope to see for ourselves!