hermit crab in a glass shell

Robert DuGrenier is an artist whose "sculptural work has had to do with creating environments which change over time due to forces in nature."  I was quite struck by the image of this hermit crab in a glass shell!  DuGrenier calls these "perfected" glass shells - crabitats!  (See more examples here.) 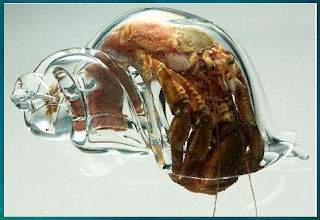 Two other works of his that sound intriguing (from his website)

Hermit crabs (Kingdom: Animalia, Phylum: Arthropoda, Subphylum: Crustacea, Class: Malacostraca, Order: Decapoda) belong to six families containing around 1100 species in total in 120 genera.  Unlike regular crabs, hermit crabs have a soft abdomen, so they need to inhabit abandoned shells for protection.  (that's where their name "hermit" comes from ... "one who lives alone")  Anyway, when they outgrow their shells, they need to leave and find a new, bigger shell to inhabit.  Usually, they find snail shells, but hermit crabs have been known to inhabit broken bottles, and maybe even a teacup?!

Personally, I have a grudge against hermit crabs stemming back from 3rd grade.  Upon returning from a field trip, I was tasked to feed the class pet.  It clamped on the soft flesh of my inner finger and would not let go.  My helpful peers and teachers did things like tap it, run it underwater, etc... while my 3rd grade self was convinced it would never come off.  Finally, it did, leaving me with a wicked blood blister.  Needless to say, I've been wary ever since. :)  But I do enjoy these glass shells as art!


Posted by C. Mytko at 11:30 AM
Email ThisBlogThis!Share to TwitterShare to FacebookShare to Pinterest

That is indeed a beauty. Natured inspired art. It is a decor that could be something out of a mirror shops sydney.

Wow, this is by far the greatest and the most creative holiday activities for kids this summer when we hit the beach. This will fascinate them so much!