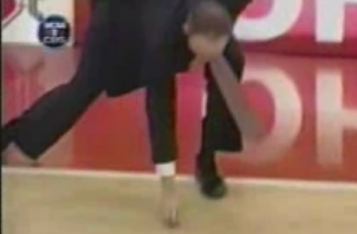 In the Ohio State - Wisconsin game on February 25, the most memorable moment of the game wasn't a three-pointer or the final score. Coach Tad Matta's actions were the big news when he picked up his recently-ejected gum from the floor and popped it back into his mouth.

According to a Chicago Tribune article, Matta said,

I have two daughters and they taught me a three-second rule. I have three seconds to pick it up off the floor and it’s still OK. I picked it up quick...

Not surprisingly, the incident found its way to YouTube.

With all this media attention, you might want to consider just how scientifically accurate is five- (or three-) second rule really is.

Jillian Clarke of Chicago High School for Agricultural Sciences tested the theory in 2003. She performed tests by dropping Gummi Bears and fudge-striped cookies onto ceramic tiles. Some of those tiles had been treated with E. Coli (a bacteria present in our intestines, but when ingested in large quantities, can give us symptoms of food poisoning). She discovered the following: (as quoted in the Tribune)
A University of Arizona researcher Charles Gerba points out that surfaces can be misleading. The average office desk, for example, harbors 400 times more bacteria than the average toilet seat. And teachers’ work spaces have more bacteria than most other professions. (Great.)

A Snopes.com article explains simply, "Unlike baseball, when food hits the floor, it's out."