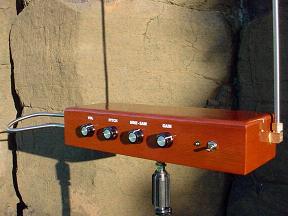 What is a theremin, you might ask? This unusual-looking instrument happens to be the only musical instrument you play entirely without touching it. It works with ether waves (like radio wave) and your body affecting its electro-magnetic field.

The theremin was invented in 1919 by Russian physicist Leon Theremin. He came to the United States in the 1920s to promote his invention until he returned to Russia. The instrument almost became extinct, until the 1950s, when Robert Moog helped to revive interest in this electronic oddity.

In recent years, the theremin has even been used in some more mainstream bands. The Beach Boys used a theremin-like instrument in "Good Vibrations," and Led Zeppelin took advantage of its eerie sounds for "Whole Lotta Love." According to a recent New York Sun article, a "new generation is embracing the theremin."

The lead singer of the theremin-based band, The Lothars, posted a pretty sweet video in which he explains the instrument and plays "Video Killed the Radio Star"!

For a more classical sound, see Masami Takeuchi or Lydia Kavina. Or watch an older clip.

Thereminworld has perhaps the most theremin information on the web, though you might visit thereminvox.com for all the latest theremin news.

Looking to buy a theremin? You can get a kit and build it yourself. Or if you are looking for a fully assembled model, you might check out the Moog or Kees theremin.
Posted by C. Mytko at 12:32 PM
Email ThisBlogThis!Share to TwitterShare to FacebookShare to Pinterest
Categories: inventions, misc