This morning, at 4:42 am (PT), the U.S. Geological Survey reported that a 4.2-magnitude earthquake shook the San Francisco area. (read article) The quake originated about two miles east-northeast of Oakland, at a depth of 3.6 miles. Oakland is just east of San Francisco, across San Francisco Bay. I remember feeling my bed shake, waking up, and wondering if it was an earthquake. However, when I saw the clock said 4:44 am, I decided leave the investigating until the morning.

According to the USGS, "Each year the southern California area has about 10,000 earthquakes. Most of them are so small that they are not felt. Only several hundred are greater than magnitude 3.0, and only about 15-20 are greater than magnitude 4.0. " Although San Francisco is not exactly southern California, the general idea is the same. There are many microquakes each day, but this morning's quake was an unusual one. (In fact, according to the USGS site right now, in the 12.5 hours since this morning's quake, there already have been 11 more earthquakes in California today!)

Earthquakes, as most of you know, are a consequence of moving tectonic plates and are measured using the Richter scale. 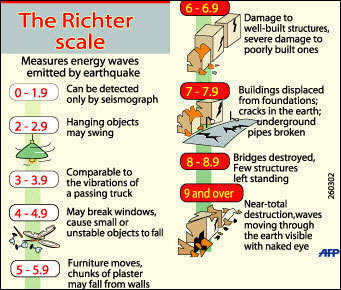 (image borrowed from some guy's blog)
Posted by C. Mytko at 5:14 PM
Email ThisBlogThis!Share to TwitterShare to FacebookShare to Pinterest
Categories: news, science