Sitting around talking in San Francisco one evening, this guy brought up a Sony ad involving and a hilly San Francisco street and superballs. (I don't know if the ad runs in the U.S. ... As you know, I can't remember the last time I turned on a TV.) Intrigued, I wanted to learn more. These ads ended up being even more awesome than I imagined! (And done without computer graphics.) Sony's BRAVIA brand uses the slogan "Color like.no.other."

To announce the arrival of the BRAVIA LCD and 3LCD range, we wanted to get across a simple message - that the colour you'll see on these screens will be 'like no other'. - Bravia site 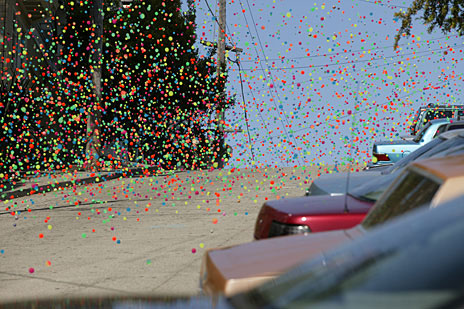 So, the first commercial (filmed in 2005) features 250,000 superballs, a kid, and one frog. It took 23 people to film and "only one chance to get [the main sequence] right". With a combination of trucks and air cannons, the balls were released. Although pretty to look at, "these balls can do some damage, so all the cars were props and crew members went so far as to having protective shields and crash helmets."

Watch the BALLS commercial.
See behind-the-scenes.
Read more about it.

Read about the British soft drink's spoof of the ad.

Keeping everyone safe was also an important factor. A special kind of non-toxic paint was used that is safe enough to drink (it contains the same thickeners that are sometimes used in soups). It was also completely harmless to the skin.

Watch the "PAINT" commercial.
See behind-the-scenes.
Read more about it.

If I watched TV, these ads might make me go buy one. :)
Posted by C. Mytko at 5:31 PM
Email ThisBlogThis!Share to TwitterShare to FacebookShare to Pinterest
Categories: misc