Scientists at the University of British Columbia and the University of California, Berkeley have discovered some amazing things while studying fin whales. First, the gulps of some of these baleen whales can take in a volume of water equal to the size of a school bus. These are no small gulps, especially with jaws that can be up to one-fifth their 88 feet body length!

Baleen whale generally have 200-400 overlapping plates hanging from each side of the upper jaw, where you might expect to find teeth. These plates, called baleen, are made of a fingernail-like material called keratin. "During feeding, large volumes of water and food can be taken into the mouth because the pleated grooves in the throat expand. As the mouth closes water is expelled through the baleen plates, which trap the food on the inside near the tongue to be swallowed." (Info from the American Cetacean Society) 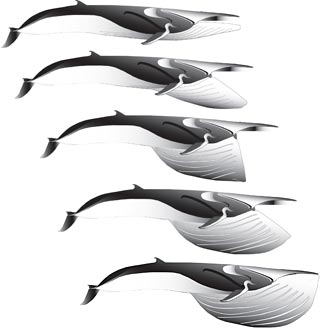 This picture (from the UC Berkeley article) illustrates the "feeding lunge of a fin whale, which can carry the whale some 35 feet and collect as much as 25 pounds of shrimp-like krill." (And these krill, averaging just 1-2 cm in length, are what feeds this 88-foot cetacean.) These whales eat using a series of 6 - 10 second lunges. Perhaps most incredibly, these lunges result the whale taking in enough water that, for those few seconds before the water is filtered out, the whale can be more than twice its normal body weight.

This process take a lot of energy for an animal swimming in the sea. Although each lunge takes them up to 35 feet through the water, there is a tremendous amount of drag on the animal.

Luckily, some whales can get their daily requirement of kill in just four hours of hunting. Pretty amazing when you consider that many whales can consume 2 tons (4000) pounds of krill each day!
Posted by C. Mytko at 3:13 PM
Email ThisBlogThis!Share to TwitterShare to FacebookShare to Pinterest
Categories: animals