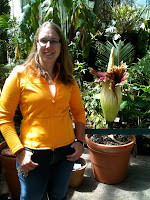 I already blogged about Amorphophallus titanum in 2007, but I like it so much, I'm going to do it again in honor of Berkeley's very own "corpse flower" bloom this week. At 2:30 p.m. Tuesday, June 29, one of the 15 Sumatran Titanum plants housed at the UC Berkeley Botanical Gardens slowly began unfurling its enormous and potentially smelly petals. I decided to document my visit with the fleeting bloom. It felt a little like taking a photo with a celebrity!

Liver-colored, reeking of rancid animal flesh and obscenely phallic, Titan arum - affectionately called the corpse flower - is hardly the stuff of bouquets and love poems. It's more like the Godzilla of the plant kingdom: big, stinky and likely to traumatize small children. (SF Gate)

The names Amorphophallus titanum and Titan arum are used interchangeably. This particular UC bloom was even nicknamed "Maldora" in the Titan Arum Naming Contest.

According to the UC page,

The legendary Sir David Attenborough first used the name titan arum to refer to this magnificent tropical plant in the BBC series The Private Lives of Plants because he felt viewers might be offended by the plant's Latin name, Amorphophallus titanum. [Amorpho meaning shapeless, phallus meaning penis, and titanum meaning huge] Titan arum might have suited Attenborough's viewers, but the plant still seduces people with one of the world's largest and rarest flowering structures and and a reproduction method that beguiles insects with the illusion of decay in appearance, odor and even temperature; hence the name 'Corpse Flower'. Generally fewer that five titans bloom each year in the US.

The plant uses its scent to attract pollinating insects, just like most other flowers. But unlike most flowers, this one hopes to attract flies and carrion beetles - insects that like to feed on rotting meat. Even more strange - it can actually generate its own heat, with the UC-Davis plant heating up from 68 degrees to 90 degrees at its peak hours of smelliness. When the flower finally opens, it releases its powerful stench for a few middle-of-the-night hours each day for 2 - 3 days. Then the blooms fades until its next appearance. The last Titan arum bloom in Berkeley was in 2009.

The fascinating thing is that no one can predict if and when this plant will make a flower. For many years the plant produces only a single, highly divided leaf that can be up to 12 feet high. During these years, the plant it is building up a large underground storage organ, called a corm. Once the corm reaches a certain size, it may send up a single enormous flower. 100 pound corms have been known to produce flower stalks up to 9 feet tall. (source)

Here is a photo of the other Titan arum plants. Looking at the potted plants, he far left pot shows a plant just sending up a shoot. The docent said at this point in its development, horticulturists can't tell whether it is going to be a leaf year or a bloom year. The next plant shows the corpse flower in its leaf-producing, corm-forming state. Third from the left is just a baby, and the far right pot contains the guest of honor - the Amorphophallus titanum flower, Maldora! 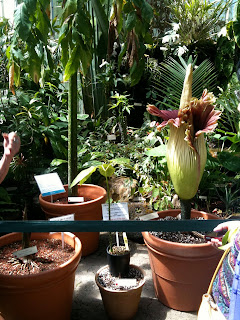 Check out this site for much more information, as well as a list of all the known blooms from 1889 through 2008!

Cool Hunting's 46th episode (video) has interviews with visitors to the Brooklyn's botanical gardens in 2006. And I love this guy hanging out with titanum.

UPDATE 7.24.10 - Today, Little Stinker is set to bloom at the UC Berkeley Botanical Gardens! Meanwhile, halfway across the country, a bride-to-be may be sharing the spotlight with Lois, a rare corpse flower, which just may open on Saturday, sending the stench of rotting meat throughout the wedding festivities in Houston's Cockrell Butterfly Center. This species of flower has only bloomed once before in Texas, and a mere 29 times in the U.S., according to the Houston Chronicle. (Uh oh... UC Berkeley Botanical Gardens has 5 weddings scheduled for this weekend!)
Posted by C. Mytko at 6:14 PM
Email ThisBlogThis!Share to TwitterShare to FacebookShare to Pinterest
Categories: science

We have an 8,000 sq. ft. high tech greenhouse operation solely dedicated to the production of the a.titanum . We hold the United States record (2009) and the world record (2010) for flowering the largest a.titanum, over 9 feet and over 10 feet, respectively. We have flowered 76 a.titanums in the past four years. We have about 500 tubers in various stages of growth right now. The weight of the tubers range from 1 pound to over 350 pounds. We believe we hold the world record for the largest/heaviest tuber. They are pretty easy to grow. The four basic secrets are: heat, around 85 degrees during the day, no lower than 65 degrees at night; high humidity with the soil damp at all times; moderate filtered light; and grow in the largest pot you can buy. Some of our pots are 5 feet wide. We use regular potting soil. Lightly fertilize. They are insect and disease free. They also love to grow in extra coarse vermiculite. All our seeds come from our plants that we hand pollinate. Pollen is frozen until the next a.titanum flowers. All tubers, seeds and seedling production is done in the United States (New Hampshire). We do not import any plant material. Our regards, Frank at Tindara Orchid Supplies. www.tindaraorchids.com