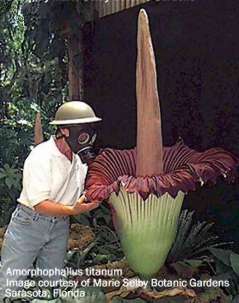 What flower can grow to over nine feet tall, have a tuber that weighs almost 200 pounds, blooms only once every 3 - 10 years, and smells like "several days old road kill on a hot, sunny day"?

It's Amorphophallus titanium, and it intrigues scientists and "regular people" alike. (You can investigate articles from National Geographic and BBC news to learn more.)

References to the "corpse flower" or "giant corpse flower," most often refer to the plant species Amorphophallus titanum, also known as the Titan arum, which has the largest unbranched inflorescence (cluster of flowers) in the world. (The apparent "giant" flower is actually made up of many, smaller flowers.)

Looking at the picture, it may not be difficult to imagine why the Italian scientists who first discovered the flower in 1878 named it after Amorpho meaning shapeless, phallus meaning penis, and titanum meaning huge.

The plant, which is native to Sumatra (a providence of Indonesia), uses its scent to attract pollinating insects, just like most other flowers. But unlike most flowers, this one hopes to attract flies and carrion beetles - insects that like to feed on rotting meat. Even more strange - it can actually generate its own heat, with the UC-Davis plant heating up from 68 degrees to 90 degrees at its peak hours of smelliness.

Amorphophallus titanum, bloomed for the first time in the United States at the New York Botanical Gardens in 1937. As mentioned, it only blooms once every few years. In preparation of blooming, the plant can grow over 6 inches a day until it reaches its full height. Then, when the flower finally opens, it releases its powerful stench for a few middle-of-the-night hours each day for 2 - 3 days. Then the blooms fades until its next appearance.

Though it is highly irregular for these flowers to bloom in the winter, there is one 220 miles southwest of London that is blooming right now! An article in Scientific American suggests that:

The warmth of 2006 and mild winter to date have encouraged the Titan Arum or Corpse Flower into a phenomenal growth spurt and into flower -- an event that usually happens only once every six to nine years.

Some recent blooms in the US include:

Posted by C. Mytko at 6:06 PM
Email ThisBlogThis!Share to TwitterShare to FacebookShare to Pinterest
Categories: science