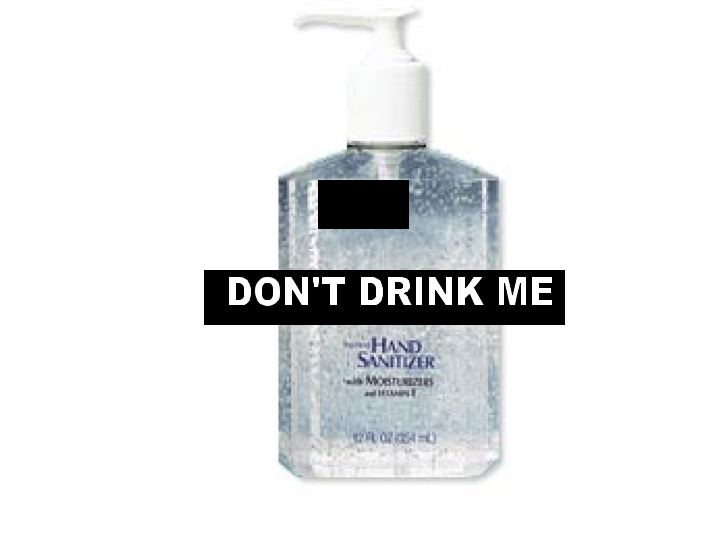 After an entry in the The New England Journal of Medicine, U.S. doctors are warning against drinking hand sanitizer. While this may seem like common sense to many of you, apparently two men drank the substance in an effort to get drunk. One man, when questioned, said he drank the substance because the label read "Active ingredient 63% v/v isopropyl alcohol."

Now, it is important to note that there are many kinds of alcohol. The kind of alcohol that most people think of is ethyl alcohol, or ethanol, the type of alcohol found in beer, wine and other alcoholic beverages. When described in Encyclopedia Brittanica, ethanol doesn't sound like something you would want to drink!

Ethyl alcohol is toxic, affecting the central nervous system. Moderate amounts relax the muscles and produce an apparent stimulating effect by depressing the inhibitory activities of the brain, but larger amounts impair coordination and judgment, finally producing coma and death. It is an addictive drug for some persons, leading to the disease alcoholism.

However, many people choose to drink it. But, it is important to realize that not all ethanol is safe to drink. As many students know, ethanol is used in schools as burner fuel. It can also be found in many other products, such as hand sanitizers and mouthwashes. However, most of this ethanol has been denatured, which means a poison (usually methanol) has been added to make you very sick if you drink it. But some people, like the men in these articles, are so desperate, they will take their chances. As you can read, it was not a very good idea.

UPDATE: Hand sanitizers, while effective in reducing germ transmission, can also cause intoxication in small children.
Posted by C. Mytko at 9:02 PM
Email ThisBlogThis!Share to TwitterShare to FacebookShare to Pinterest
Categories: news, science