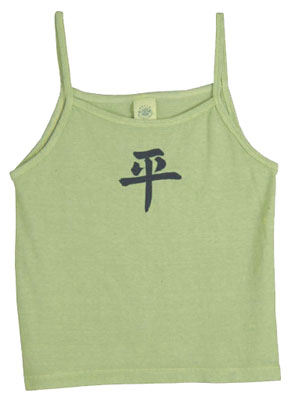 I must admit, when I think of "organic clothes," I think of those scratchy, free-flowing pants and tops, in muted browns and greens, that are sold in stores next to the hacky sacks, incense holders and tarot cards. However, a recent AP article in the Chicago Tribune article (.pdf) made me think about "organic" in a whole new light. (I borrowed its title for my post, catchy, isn't it?)

Whether shoppers are buying eco-friendly because it's trendy or because they hope to preserve Mother Earth, they no longer have to sacrifice fashion for philosophy. With major retailers like Target, Victoria's Secret, H&M and Nike joining the green trend, there's something for fashionistas of every price range in 2007.

Target, which carries a select number of organic baby clothes, is expanding its line this year. (Sam's Club and Wal-Mart are among the top five brands who use the most organic cotton globally, according to Organic Exchange.)

People have been embracing organic food and health and beauty products for years, why the interest in organic clothes, seemingly all of sudden ?

With celebrities endorsing hybrid cars, vegetarian diets and launching their own eco-friendly clothing lines, experts say it was only a matter of time before the Hollywood trend caught on with fashion.

"It clearly has gotten more attention now because .... It's a global phenomenon," said Marshal Cohen, chief analyst for the NPD Group, a market-research firm. "We're seeing it in cars, we're seeing it in homes products, apparel, food."

Organic clothes used to mean only help, which was, for the most part, brown and scratchy. Now, you will find cotton, hemp, bamboo, wool, soy, corn and other natural fibers being used to manufacture natural and healthy fabrics. But, like many responsible ecological choices, it is not only about the product. The process is also better for the environment.

It takes about a third a pound of pesticides to produce one cotton T-shirt. About 180 to 300 pounds of chemical fertilizer is used on one acre of cotton in the U.S. About 90 percent of the fertilizer doesn't stay on the plant, but washes off, ending up in water supplies and habitat, says Klein.

Retailers say it's not just about buying organic, it's about the entire process. Under The Canopy uses a dye factory fueled by rice husks instead of fossil fuels. Growing organic also requires crop rotation, meaning a field that this year is used for cotton could be used for food the next.

With all these benefits, who wouldn't buy organic? Well, it's back to those two staples of American life: convenience and price. While organic clothing is becoming more widespread, it is generally easier to find non-organic clothing. Any organic clothing will cost you more. According the the Tribune, "A men's vintage-style organic cotton T-shirt at Wal-Mart is $9.83, while a similar regular cotton T sells for $8.83. Levi Strauss & Co. started offering organic denim jeans in select stores in November -- $68 for their Red Tab jean compared to $40 for non-organic. "

A blogging couple explains why organic clothing costs so much. (Plus, you can learn a lot more about the topic, on their blog, Organic Clothing!) They basically explain that organic seeds are more expensive to plant and harvest. The cotton or other fiber is also harder to manufacture and advertise, due to the relatively small market and lack of the mass-buying power that large chains have. Also, many organic vendors recoil from using "sweat shops," instead choosing to keep the labor in the US, paying fair wages. All of these factors contribute to the higher price.

An inconvenient truth is that organic and all-natural clothing will always be more expensive than conventional, chemical clothing. The good news is that the price gap will continue to shrink as the market size of organic clothing grows and the economies of scale improve. Doing what is right is not always easy … or cheap...

Posted by C. Mytko at 5:00 AM
Email ThisBlogThis!Share to TwitterShare to FacebookShare to Pinterest
Categories: environment, news, science