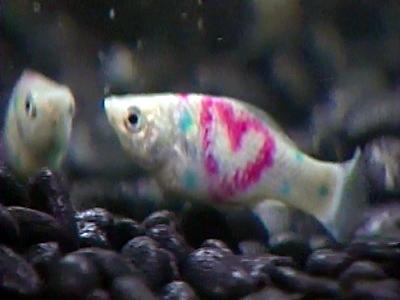 Alright, I have come to terms with a lot of crazy pet trends, but does the world really need tattooed fish? A tropical fish supplier in Hong Kong is offering a new service in which it will decoratively tattoo fish using a laser. Apparently, dyed fish are not new, since people have being using acrylic paints or dyes on fish since the 1980s.

According to an article in Practical Fishkeeping, Chairman of the HK Aquaria Mall, Alen Lee, told the Chinese newspaper Mingpao,

Firstly, we need to select the appropriate fish and use only low intensity laser beams. We only engrave on the fishes’ scales, not through them. We also had concerns over the possibility of animal abuse, but to date the mortality rate has been zero. The fishes don't even bleed.

Some experts claim that the technique is no different that the dyes used to track fish for ecological studies, while others condemn the practice as being cruel and totally unnecessary. The UK's Practical Fishkeeping Magazine has even been sponsoring a Dyed Fish Campaign since 1996.

It devalues living creatures and treats them as if they were some inanimate object that can be decorated purely for whim or commercial gain.

Hmmm...I wonder what that says for human tattoos? (Although I understand that the fish do not have a choice in the matter.) If you are interested in more information, a Los Angeles TV station offers a slide show and video of some of the fish that have found their way to the States.
Posted by C. Mytko at 9:23 AM
Email ThisBlogThis!Share to TwitterShare to FacebookShare to Pinterest
Categories: animals